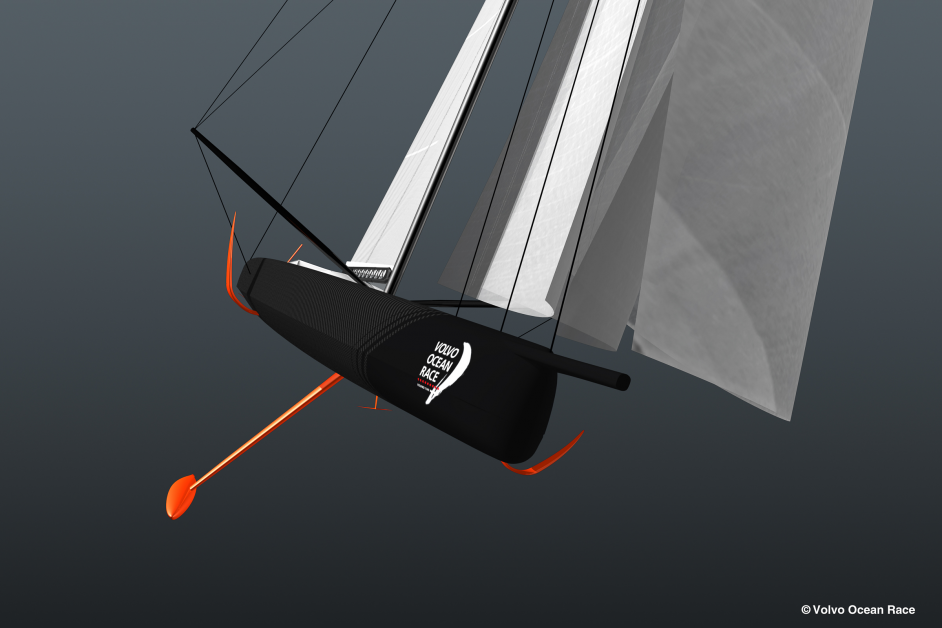 The Volvo Ocean Race has solved the question of whether its future should be monohull or multihull – by opting for both. The introduction of a foil-assisted 60-foot (18.29 metre) monohull for the ocean legs plus an ultra-fast 32-50 foot (10-15m) flying catamaran for use inshore will elevate the race to the ultimate all-round test in professional sailing.

The race announced the next generation of One Design boats – to be introduced in 2019 and designed for use over at least six years ­– as the centrepiece of its vision for the next decade which significantly raises the game in both sporting terms and commercial value. 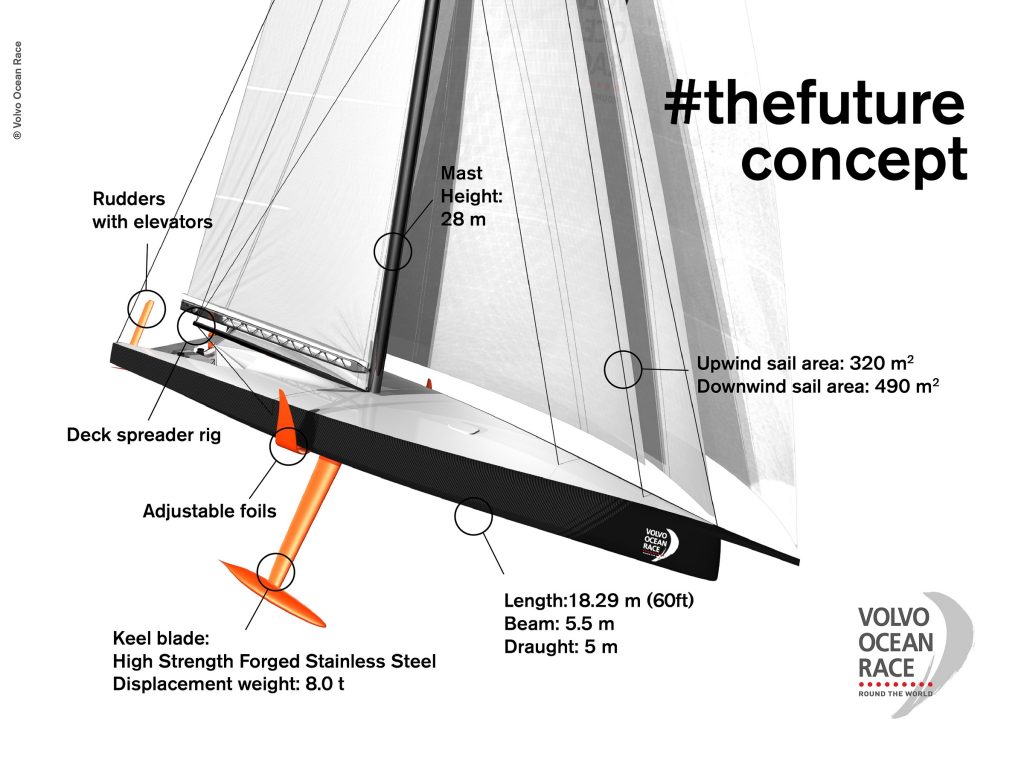 “We had a lot of debate about multihull versus monohull – strong arguments in both directions. We decided on three hulls – a monohull plus catamaran!” Volvo Ocean Race CEO Mark Turner revealed at a special event at the Volvo Museum in Gothenburg, home of the race’s co-owners Volvo Group and Volvo Car Group.

“This new formula for the Volvo Ocean Race will, for the first time, test world-class sailors at the top-end of both aspects of the sport – in what remains our core DNA offshore ocean racing on foil-assisted monohulls, plus inshore racing during the stopovers employing the latest ‘flying’ multihull technology.

“We’re using the best tool for each discipline. It’s going to push the sailors, and sailing teams overall, to levels they have never previously had to perform at in order to win one of sailing’s ultimate prizes.”

To win the Volvo Ocean Race in the future will demand expertise in both monohull on the offshore ocean legs and multihull racing in the In Port Series, as both platforms will be raced by essentially the same crew. Currently the In-Port series counts only as a tiebreaker in the case of equal points at the final finish line – in 2014-15 it actually changed the overall positions for two teams, confirming that it was already critical to do well even as a tiebreaker. In the future, the In-Port series will take slightly more importance again, but without changing the fact that it’s the ocean legs that count for the lion’s share of the points.

France’s in-demand Guillaume Verdier is designing the new monohull, which will use the very latest in foiling technology and is essentially a turbo charged IMOCA 60. The plan is that the design will include an option for the platform to be convertible, relatively quickly and inexpensively, to a short-handed rules-compliant IMOCA boat, able to compete in other major events on the IMOCA circuit such as the solo Vendée Globe and two-up Barcelona World Race.

A tender process opened today for the design and build of catamarans (32-50 foot; 10-15 metre) which will be built to a strict One Design rule like the monohulls, permitting much of the very latest ‘flying’ technology to be built in, but at relatively low cost.

“The America’s Cup, one of the other pinnacles of our sport, will always be at the absolute cutting edge development wise, with incredible technology leaps that we will see first-hand in Bermuda next week which are quite stunning,” said Turner. “We have seen the same technological advances in the IMOCA class with the introduction of foils in the recent Vendée Globe.

“Our goal with the Volvo Ocean Race is to set the bar as high as we can within the confines of existing campaign budgets, and within the context of One Design – where one is obliged to lock the technology level for each race cycle.” 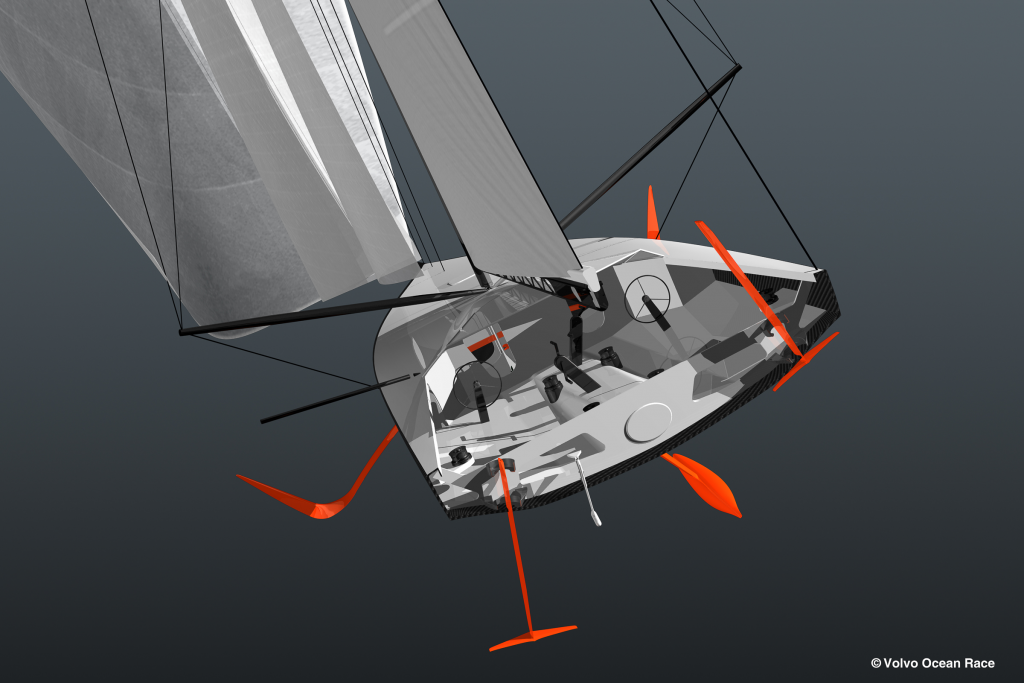 Initial builds will be 8 of each mono and multihull, and will be made available to teams on a lease basis, thereby removing the asset purchase barrier that often prevents teams start-up, with sponsors involved in the upcoming 2017-18 edition getting first option. The first of the new boats will be completed by January 2019, with the whole fleet ready by the middle of that year.

Persico Marine in Bergamo, Italy will lead the construction of the new monohull and the race’s own team of boat builders and experts at The Boatyard will complete the final fit-out, at a location to be confirmed as part of the Host City Tender process.

While it will be strictly One Design, there will be a lot to play with and learn on these new machines – plenty of scope for ‘tinkerability’ by the teams in terms of the way the boat is set up to race. Possible evolutions in between editions will be built in as far as possible to the concept from the start.

“The new boats will be delivered on a lease basis, and along with the growing package of benefits provided centrally by the race, we expect budgets to be at a similar level today,” explained Race CEO Mark Turner.

Those team budgets are at an average of 10-12m euros spread over two years, including several million normally attributable to activation costs.

“The provision of central services and equipment allows the sailors to concentrate on winning the race on the water, rather than duplicating costs across the campaigns,” Turner continued.

“Teams and sponsors are going to have to act quickly because we do expect these exciting new boats to sell out quickly. The Notice of Race, Commercial Partnership Agreement, and Boat Lease for the next edition will be published before this upcoming 2017-8 race starts in October.”

Verdier, who is currently finalising plans for the next generation boat alongside his team of designers, said: “I’m extremely excited to be trusted with the task of delivering the next generation of Volvo Ocean Race boat. Volvo Ocean Race sailors have a reputation as relentless athletes who push extremely hard and the future boat design reflects that.

“For that reason, it’s important to retain a certain level of safety in the design, which is especially key due to the places the fleet races through, such as the Southern Ocean.

“Given their reputation, we know that Volvo Ocean Race sailors are unlikely to retract the foils, and where many single-handed sailors might slow down, they won’t.

“With that in mind, it’s a huge challenge to design a machine that is both extraordinary to sail, but also safe at the same time.”

Crew numbers will be between 5 and 7, plus the OnBoard Reporter, and rules will continue to include incentives for mixed male-female crews and youth sailors.

Speaking about the key decision on boat design, Turner also said that in the longer term, the race could even go fully multihull.

“Following our detailed discussions this time around, there is no longer any kind of conceptual barrier to the Volvo Ocean Race going multihull offshore in six years’ time, a decision to make just 3 to 4 years from now. We came very close to going that route this time.

“In the next decade, it’s very possible that we’ll see multihulls from the new French Ultime class racing across the oceans, most of the time flying above the water, rather than on it – a significantly greater challenge than doing so inshore in flatter water.

“But ultimately, we felt that it was too early in the development curve, especially when building a large One Design fleet, to jump in to this now. Modifying an entire fleet with every technology step is not realistic.”